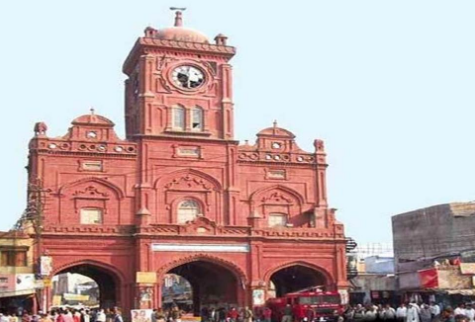 Top News from Meerut and other districts This also includes the case of 23 prisoners being found HIV positive in the district jail of Saharanpur.

Meerut, Jn. Today many major cases are in discussion in Meerut and surrounding districts. Here we are going to tell you such big news in less words.

BIJNOR: Union Minister of State for Ports, Shipping and Tourism Shripad Naik said in the Prabuddha Samaj and Karyakarta Sammelan held at two places in Chandpur that Prime Minister Narendra Modi and the Chief Minister of UP are saving the country’s culture and heritage. The same poor section is getting the direct benefit of the government scheme. After that he left for Vidurkuti.

The district was submerged by the first torrential rain of monsoon

Meerut: The first torrential rains of the monsoon started with the dawn of Tuesday. However, the Meteorological Department had issued a yellow alert and expressed the possibility of light rain. But contrary to the expectation, the rain turned out to be much stronger. The sultry heat kept people waiting for rain for a fortnight. The cool winds blowing along with the rain gave a pleasant feeling. Due to heavy rain, the mercury dropped. Strong winds accompanied the roar of lightning. In the surrounding districts of Meerut also, it started raining till 11 am.

Bulandshahr: In the last few days, the incidents of murder have increased rapidly in the district. There have been five murders in two days. In this, four murders have been done in a sensational manner. With this, questions have started being raised regarding the law and order situation. There is bleeding due to minor reasons like love affairs and greed for land. The police are also sweating in revealing the incidents of murder.

Meerut: A student of class VII made a mobile battery operated fan

Arjun, a student of Dhantala village, has a keen interest in science. He keeps on trying new things in the house. Seeing the family members troubled by the heat, he made a small fan running on the battery of the mobile.

Bijnor: Now the Van Gurjars want to join the society

There are six settlements of Van Gujjars in the Amangarh region. Many generations of Van Gujjars have been residing here. They live in small settlements among predatory wildlife like tigers, guldars, elephants etc. Animal husbandry is their profession. They do not have any relation with the outside world, but now Van Gurjars want to join the society. Van Gujjars do not have any other source of income. Due to being away from education, their socio-economic upgradation has not been done. Due to all these circumstances, they have become accustomed to living in the forests and adopting the lifestyle of the forest. Now they want to settle outside in Amangarh. They also aspire to educate their children. For this, he has contacted the officers of the Forest Department.