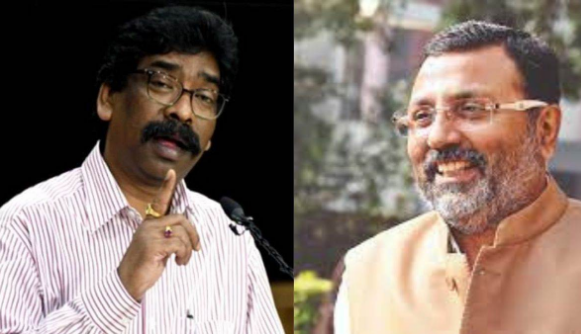 Ranchi, State Bureau. BJP MP from Godda Dr. Nishikant Dubey has claimed that taking cognizance of his letter, the CAG will conduct an audit of Jharkhand Chief Minister Hemant Soren’s case. It is alleged that Chief Minister Hemant Soren, in addition to mining lease, kept eminent lawyers in the High Court and Supreme Court of the Chief Minister and his brother pending in the High Court, Election Commission case at government expense and paid more than Rs. The MP claims that now that the CAG has decided to conduct an audit, then all the allegations will be clear.

Dr. Nishikant Dubey had written a letter to CAG Girish Chandra Murmu informing that Jharkhand Chief Minister Hemant Soren is fighting his personal case with government expenses. He has engaged the country’s eminent lawyer Kapil Sibal, Mukul Ratogi, Pallavi Langar, Advocate General and his team in the defense of the cases going on against him. On this, payment of more than Rs. He has urged for recovery of the said amount and to call for a reply from the concerned officers.

MPs demanding to recover the amount from the concerned departments

BJP MP Dr. Nishikant Dubey has written that separate cases are pending against Chief Minister Hemant Soren and his associates for investment in shell companies, mining lease and Election Commission. These are his personal matters. The case is not on the Chief Minister or the state government, but on Hemant Soren. He has raised the question that why this expenditure being incurred without the approval of the Jharkhand Legislative Assembly should not be recovered from the salaries of the heads of the departments concerned.

CAG took cognizance of my letter, besides mining lease of Chief Minister Hemant Soren ji, in my case, in the case of Chief Minister and his brother, audit on eminent lawyers in personal matters like High Court, Supreme Court and Election Commission for looting public money by Jharkhand government. decided to