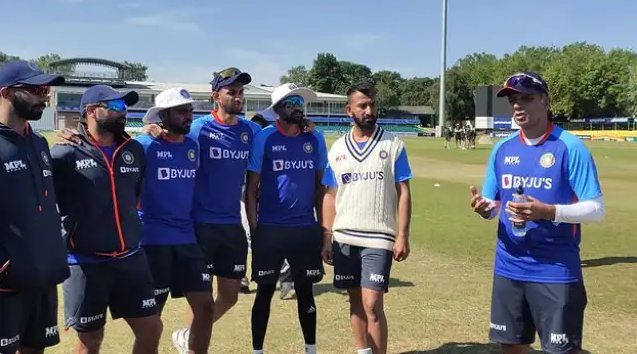 The Indian team will play a four-day match in Leicester from June 24 before the decider against England. After joining the team, Dravid reached the ground, where he met the players who were practicing.

Just two days after the end of the T20I series against South Africa at home, head coach Rahul Dravid has joined the Indian Test team in Leicestershire ahead of the England series. Team India, led by Rohit Sharma, has to play a Test match with England at Edgbest from July 1. This match between the two teams in the last match of the five-match Test series, which was to be played last year, was postponed due to Corona. The Indian team is currently leading 2-1 in the series and even if the Birmingham Test draws, Team India will win the Test series on England soil for the first time since 2007.

The Board of Control for Cricket in India (BCCI) has shared pictures of Dravid joining the team. The board wrote in the caption with these pictures, ‘Look who is here! Head coach Rahul Dravid has joined the Test team in Leicester. The Indian team will play a four-day match in Leicester from June 24 before the decider against England. After joining the team, Dravid reached the ground, where he interacted with the practicing players and also gave them the ‘Guru Mantra’ of victory.

Barring Dravid and some players, all the other players of the Indian team had left for England on 16 June and the team has started its preparations by going there. Dravid accompanied wicketkeepers Rishabh Pant and Shreyas Iyer to England later as they were part of the five-match T20I series against South Africa, which recently ended in a 2-2 draw.