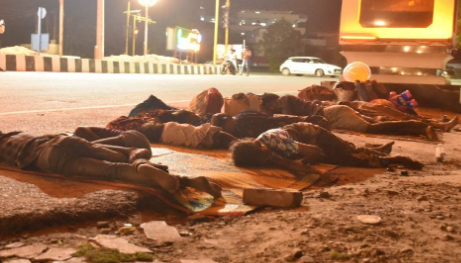 Gorakhpur News In Gorakhpur, hundreds of people are forced to spend the night on the streets keeping their lives on their palms. Hundreds of people sleep on roadside divider rickshaws and footpaths every night at places like Asuran Treasurer Sports College, Circuit House Road, Gorakhnath Overbridge etc.

Gorakhpur, Satish Kumar Pandey. Behind the police post on Circuit House Road, the entire family of laborers was sleeping on the roadside on Sunday night. There was neither a sheet to lay nor to wear, the body was somehow covered in torn clothes. Seeing the vehicles rustling from side to side, it would seem that they would climb on top of them. This is the situation all over the city. Even after the night shelter is empty, hundreds of lives sleep in the face of death every night due to mismanagement.

Here people sleep on the streets

Every night hundreds of people sleep on roadsides, dividers, rickshaws and footpaths in the city’s Circuit House Road, Gorakhnath Overbridge, Dharamshala, Traffic Tiraha, Asuran, Khazanchi, Sports College, Tipinagar. Any accident can happen with them at any time, but the officials of the administration, police and municipal corporation are not worried about it. No one even learned from the accident in Padleganj a month ago. No one knows who the people sleeping on the pavement are, what they do in the city. The police only know that these people are residents of other district or state, have come here in search of livelihood. After working for the whole day, they spend the night by the side of the track. A major accident can happen with people sleeping on the roadside and divider at any time.

At some distance, the dumper trampled five laborers

More than 300 lives are lost in accidents every year

Every year, more than 300 people die in accidents at different places in the district. Police and administration officials run awareness campaigns to avoid accidents, but they have to pay no attention to people sleeping in the face of death. No.