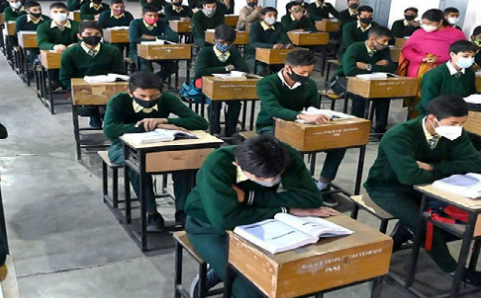 Imphal Agencies. The rapid increase in new cases of corona has once again raised concerns among the people. Meanwhile, the Manipur government has ordered Mangalawar to close all schools in the state till July 24. According to news agency ANI, a notification issued by the Manipur government said, “Increase in Covid-19 cases and test positivity rate ratio in the state is more than 15 percent, all schools (government/private) in the state closed till July 24.” Will stay.’ The state health bulletin said that 59 fresh cases of Kovid-19 have been reported in Manipur on Tuesday. On Monday, 47 people were found to be Kovid infected.

In the last 24 hours, 13,615 new cases of corona were reported across the country.

The Directorate of Health Services in the state said that 15 people have also recovered in Manipur in the last 24 hours. Meanwhile, in the last 24 hours, 13,615 new cases were registered in India, taking the total number of corona infected people to 4,36,52,944. While the death toll rose to 5,25,474 with 20 new deaths in the last 24 hours. According to the Union Health Ministry data, the active cases rose to 1,31,043.

Monsoon session organized under Corona protocol this year too

Rajya Sabha Chairman M Venkaiah Naidu has said that the upcoming monsoon session of Parliament will also be held under the Corona Protocol. Monsoon session is starting from 18th July and will continue till 12th August. Voting will be held for the Presidential election on 18 July and the Vice Presidential election on 6 August. While administering the oath to the newly elected members of the Rajya Sabha on Friday, Naidu said that the seating arrangement is being made to maintain physical distance between the members. Under this, arrangements will be made for the seating of members in the audience gallery of both the houses of Lok Sabha and Rajya Sabha. Sources said that after talks with the concerned members of both the houses, it was decided to hold the monsoon session under the Corona Protocol.