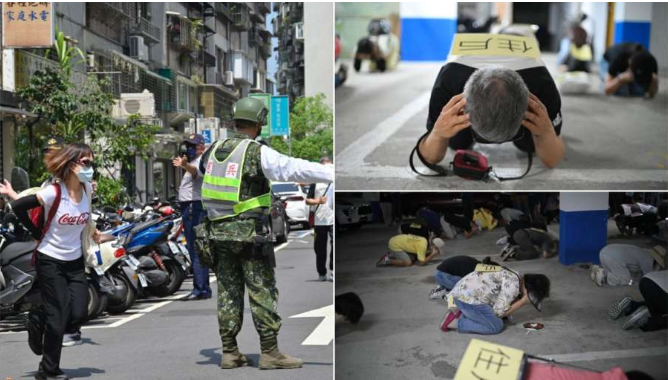 China claims that the democratic country Taiwan belongs to its mainland. He has never denied the possibility of annexing Taiwan by military force.

Taipei Exercise: Since the ongoing war between Russia and Ukraine, the fear that China can attack Taiwan at any time has intensified. The Chinese army has also increased its activities against Taiwan since last year. Since then, the relations between the two countries have deteriorated further. From time to time, China has also been expressing its displeasure over the visits of US officials to Taiwan. There were also reports in which China said that it would also annex Taiwan into main Chinese land through military force. This is the reason why Taiwan has already started preparing to protect itself. For this, training is being given to the people.

There have been reports that people have been ordered to stay indoors and clear the streets in many other areas including Taiwan’s capital Taipei. This order has been given due to the preparations for the air strike being done under military training on Monday. As part of the training, the roads were immediately cleared in preparation for air strikes. During this, at around 1:30 in the afternoon, sirens started sounding in the cities. Due to which many cities in northern Taiwan came to a standstill for up to 30 minutes. This shows that Taiwan has intensified its preparations to face the Chinese attack.

A ‘missile alert’ was sent to people’s mobile phones in the form of a text. In which he was asked to immediately go to a safe place. This information has been given by the news agency Reuters. This military training is named Van Aan. Which means peace. After overseeing the training, the mayor of Taipei said it was necessary to prepare for a state of war. China claims that the democratic country Taiwan belongs to its mainland. He has never denied the possibility of annexing Taiwan by military force.

More careful after attack on Ukraine

Taiwan has rejected China’s claim of sovereignty and vowed to defend itself. At the same time, when Russia attacked Ukraine, once again a debate broke out in the matter of Taiwan. In such a situation, preparations have been intensified to deal with the situation of war. This training is happening at a time when the Chinese army has also increased its training around this island country. Mayor Ko says that Chinese military aircraft have been harassing Taiwan for the past few years and the war between Russia and Ukraine has also started in February. These incidents show that we need to be alarmed.

Taipei police, on the other hand, have trained vehicles to park on the side of the road and pedestrians on the road to quickly find a hiding place. Apart from this, shop and restaurant drivers were asked to switch off the lights by dropping the shutters so that no one could attack them during the night. Firefighters are practicing how to douse the fire if it is caused by missile strikes.