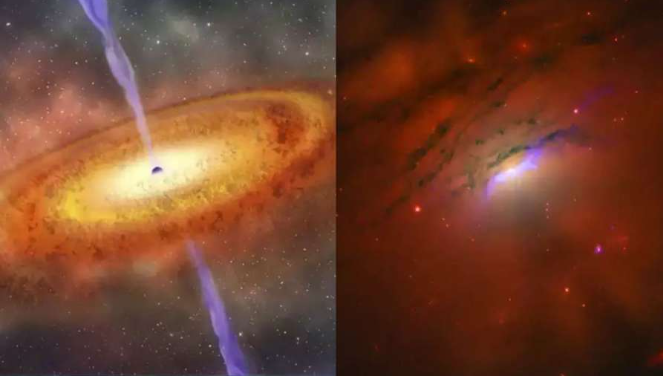 Black holes are regions of space where gravity is so intense that nothing, including light, can escape from them. They swallow everything.

Supermassive Black Hole Formation of Stars: A team of astronomers has developed a special model that will help to find out how a large black hole can affect the birth of stars. Observatory data has concluded that the process of their formation in the middle of stars is being affected by this. Researchers have used information from the European Southern Observatory (ESO), the Atacama Large Millimeter Array (ALMA) and the Very Large Telescope (VLT) to measure gas pressure in jets and interstellar clouds. . Black holes are regions of space where gravity is so intense that nothing, including light, can escape from them. They swallow everything.

Researchers have found that the jets result in changes in the internal and external pressures of the molecular clouds in their path. Scientists believe that extremely large black holes are present at the center of all galaxies. Any particle that falls on the black hole gets trapped in the black hole’s magnetic field and escapes as a powerful jet of plasma. If you look at it from afar, you will find that long plasma is coming out from both sides in the center of the black hole. However this is different in the case of IC 5063 Galaxy.

The distance is 156 million light years

IC 5063 Galaxy is located at a distance of 156 million light years from Earth. In this, the jet (from which the particles are released) does not come out directly and gets covered in dense molecular clouds. Black holes also do the work of making these jets. It can affect these molecular clouds. This is what causes instability in China gravity and then affects the density of the gas, due to which stars are formed. This study has been published in Nature Astronomy. The team has collected the results for this using advanced astronomical algorithms with the help of observational data.

“We look at thousands of astronomical simulations to determine the possibility of IC 5063,” said study co-author and DFG Fellow at the University of Cologne, Dr. Thomas Bisbus. According to the study’s lead author Professor Kiliopi Dasayara, ‘Research results have shown that large black holes may exist within the galaxy, and this can also affect the process of star formation on a large scale, that is, their birth. ‘

About two months ago it was reported that astronomers have released the first picture of a ‘supermassive black hole’ located in the middle of ‘our Galaxy’. The discovery, published in The Astrophysical Journal Letters, provides substantial evidence that the discovered object is in fact a ‘black hole’ and is 4 million times more massive than the Sun. This image has been prepared by a global research team named ‘Event Horizon Telescope (EHT) Calibration’. For this it has taken the help of a worldwide network of radio telescopes.