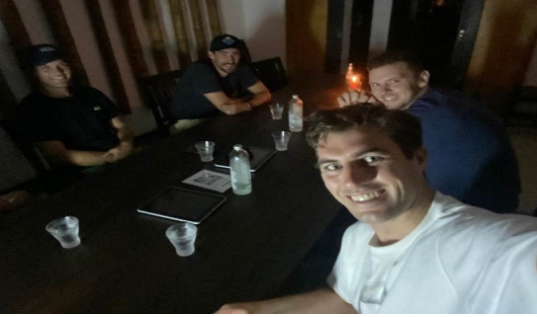 AUS vs SL The Australian players who went on a tour of Sri Lanka faced difficulties when they had to wait for the lights in a restaurant. Pat Cummins himself shared about this incident on social media.

New Delhi, Online Desk. Australia team is currently on tour of Sri Lanka. This tour is also important because the current situation of Sri Lanka is not good and it is going through financial crisis. The people there are also facing shortage of essential things like fuel, electricity and food. But before the 5th ODI match, the players of the Australian team also had to face this situation of Sri Lanka when they were sitting in a restaurant to eat food.

What is the whole matter?

However, he also praised the people of Sri Lanka in this odd situation. He wrote that Sri Lanka is going through a very difficult time yet its people have been wonderful to us and we are grateful to be here. Mitchell Starc, Alex Carey and Josh Hazlewood are also seen in this picture along with Pat Cummins.

Let us tell you that this tour of Australia team has brought a smile on the faces of the people of Sri Lanka. After defeating Australia in the fourth match, Sri Lanka gave a gift to their fans by winning the series against Australia after 30 years, after which the whole stadium was in joy.

On this tour, Australia team has played 3-match T20 and 5-match ODI series. Australia defeated Sri Lanka 2-1 in the T20I series, while Sri Lanka won the title 3-2 in the ODI. After 30 years, Sri Lanka has won the series against Australia on their soil. Now Australia have to play a two-match Test series, which will start from June 29 at the Galle Stadium. The second Test match of the series is to be held at this ground from July 8.