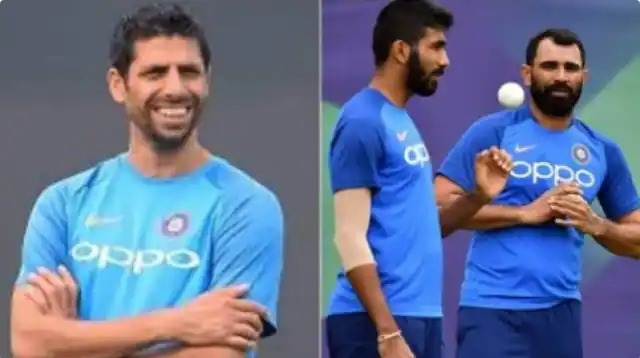 Ashish Nehra said that only four fast bowlers will be selected for the Indian team for the T20 World Cup and Bhuvneshwar Kumar will not be named in it. He said that Bhuvi is not sure of a place in white-ball cricket.
Indian fast bowler Bhuvneshwar Kumar recently created history in the T20 series against South Africa. Bhuvneshwar is the first Indian fast bowler to win Man of the Series more than once. Bhuvneshwar took six wickets in the five-match T20I series against South Africa. He took these wickets in four matches of the series at an average of 14.16 and a strike rate of 10.4. For his performance, Bhuvi has been adjudged the Player of the Series. Despite Bhuvi’s stellar performance, former fast bowler Ashish Nehra does not see him joining the Indian team for the T20 World Cup 2022. Nehra believes that Bhuvneshwar’s place in white-ball cricket is not confirmed.
Nehra recently made Gujarat Titans champion in IPL 2022 as a coach. He believes that when India’s full bowling attack comes back in T20, then Bhuvi will not get a place there. Nehra also said that only four fast bowlers will be selected for the Indian team for the ICC T20 World Cup to be played in Australia and their names will not be there. After this statement of Nehra about Bhuvneshwar’s future, it seems that the fans of Bhuvi are getting furious.
Former fast bowler Nehra said in a conversation with Cricbuzz, ‘Bhuvneshwar Kumar bowled very well in this series. His balls were swinging a lot. However, it is important for his career that he has to focus on his fitness. At present, many bowlers in the Indian team are much younger than him and are also more agile than him in terms of fitness. His place in white-ball cricket is not confirmed yet. If he wants to be included in the World Cup team, then he will have to work very hard now. Only four fast bowlers will be selected for the World Cup and Hardik Pandya can be an option as the fifth fast bowler. So it is going to be a big challenge for Bhuvneshwar.
He said, ‘Bhubaneswar has got his confidence back from this series. Even in IPL, he has bowled better than last the last two seasons. This is a huge plus point for any player because in T20 you not only see the opening but he also has slower deliveries. Knuckleball and even if it is 130 kmph, it is not easy to hit yorkers.