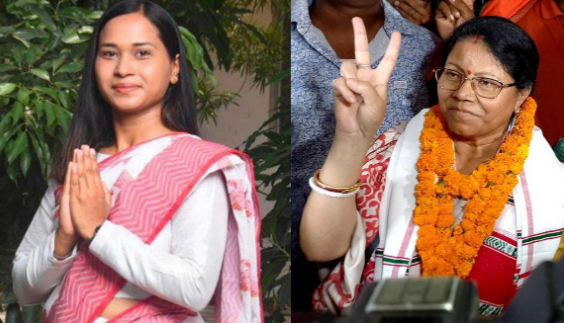 Mandar Assembly Bypolls 2022 Assembly by-elections were held in Mandar, Jharkhand on Thursday. The election was peaceful. There is no report of violence from anywhere. Tight security arrangements were made. A total of 14 candidates were competing in the fray. Now their fate will be decided on June 26.

Ranchi, State Bureau. The by-election for Mandar assembly seat in Ranchi district was completely peaceful on Thursday. A total of 61.25 percent votes were cast in this. The fate of 14 candidates was captured in the EVMs. Shilpi Neha Tirkey will win the election, will she be able to save her father brother Tirkey’s seat or Gangotri Kujur will return. In the battle of both, Devkumar will win the paddy, it will be clear from the counting of votes on June 26. Shilpi Neha Tirkey was contesting on Congress ticket. JMM supported them. Similarly, BJP had fielded former MLA Gangotri Kujur as its candidate. On the other hand, Dev Kumar Dhan was contesting as an independent candidate of the BJP. He was supported by AIMIM. While Chief Minister Babulal Marandi was campaigning day and night in favor of BJP candidate, Asaduddin Owaisi addressed the election meeting in favor of Dev Kumar Paddy. Owaisi had raised the election by bringing the election to a new point through the election meeting. Now on June 26, it will be known who is winning the bet.

Crowd of voters in 433 booths since morning

The Election Commission of India had made elaborate arrangements for free and fair voting here. According to the commission, no untoward incident was reported during the counting of votes. Crowds of voters were seen in the 433 polling stations set up in the by-elections since 7 am. Even at the scheduled time of polling at four o’clock in the evening, people were standing in the queue to vote, who were given a chance to vote. Let us inform that in the Mandar by-election, 35 model polling stations were set up in 433 polling stations. Apart from this, 38 such polling stations were set up where the number of Pardanshi women voters was high. Due to this, a woman polling officer was deputed at these centres. In the by-election, 484 volunteers, 65 wheelchairs and 25 vehicles were arranged by the commission for the differently-abled voters. In this by-election, 3,035 Divyang voters and 2,845 voters above 80 years of age exercised their franchise at the polling station and 747 through postal papers.

During the entire election process, in order to ensure compliance with the Model Code of Conduct, the Election Commission caught Rs 10,000 in cash and Rs 1,33,228 in illicit liquor. Along with this, other material worth Rs 14.10 lakh was seized. According to the Election Commission, the counting of votes will start from 8 am on June 26. The election results will be declared by late evening.

On the other hand, after the Mandar assembly by-election held on Thursday, the Congress has claimed victory. Jharkhand Pradesh Congress Committee spokesperson Rakesh Sinha has said that the victory of the Congress candidate supported by the Grand Alliance is certain in the Mandar assembly by-election, which was held on Thursday. The way the people of Mandar showed enthusiasm for voting, it clearly shows that the people of Mandar have come forward to expose the face of BJP against inflation, unemployment and injustice being done to farmers. The Congress has nominated Shilpi Neha Tirkey, daughter of former minister Bandhu Tirkey, from this area.